With this new tool you can automatically distribute a connection to other profiles in the drawing with the click of a button.
The distribution is based on geometric recognition. If the base profiles are of the same type and have a similar position with respect to each other, the connection is automatically copied. This will save you a lot of time when the same types of connections are used often.

With this new command you can easily draw weld symbols on the workshop drawings.
The configuration of the symbol was entirely done with visual aids, resulting in an easy to use tool. The tools for drawing industrial stairs and railings has been completely renewed. The stairs and railings are now fully built up with the aid of macros. Thanks to these macros you can still adjust the parts after they are drawn via the macro window.
A stair can be drawn based on a line, or between 2 beams. A railing can be drawn on top of a profile or a line.
A series of connections were also added to connect the handrails and the stair stringers.
2 new cage ladders were also added: A cage ladder with a larger ring at the bottom, and a cage ladder according to the PIP STF05501 standard.
This is only the beginning of the changes to stairs in Parabuild. 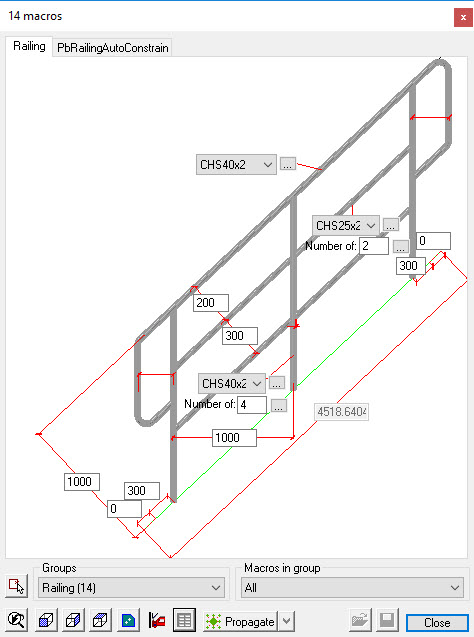 When a generic solids model is opened in BricsCAD, BricsCAD has the ability to recognize these solids as linear profiles: ‘Bimify’. After BricsCAD has applied BIM information to the profiles there is no further intervention needed to convert the linear Solids to Parabuild profiles.
The conversion will be done automatically when using the context modeler on the solids or when attempting to connect the solids.

When you perform an Ifc export using the BricsCAD command, then all BricsCAD objects such as BIM elements and 3D Solids are now exported together with all Parabuild objects in the same Ifc file.
These functions will only work in combination with the BricsCAD V18 BIM module.

With this new function you can perform a series of actions on one or more elements. 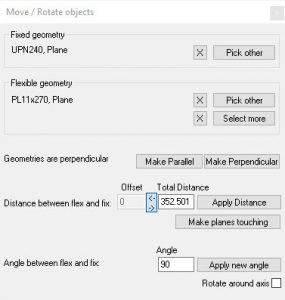 The purpose of this is that you can move or rotate the elements in a certain direction without having to change the UCS first. This is especially interesting if the movement you need to perform is not according to the World X, Y or Z axis.
You use a plane or line of another element as a basis for the movement or rotation.
These are the actions you can perform: Extra attention was paid to the performance in Parabuild.
For example, calculating macros is much faster. The opening of large drawings has also been greatly accelerated.
The drawing of holes in 3D visual styles was also improved, which results in a high performance improvement when using these visual styles.

Writing of DXF files for plates was greatly improved. The welding contours are now correctly trimmed, and the texts will no longer be drawn over these contours.
The Dxf files can now be sorted automatically into a folder per thickness. 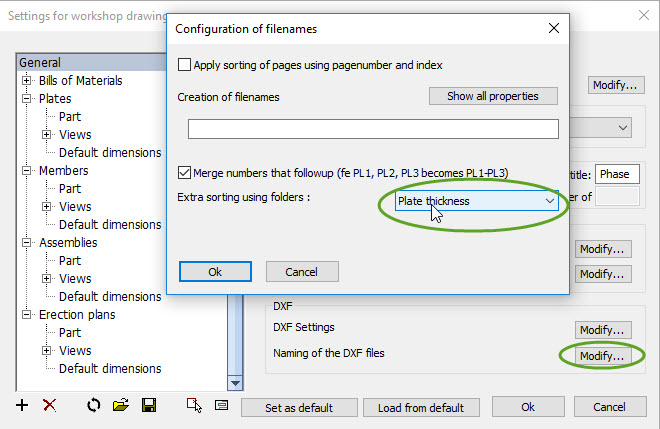 In the properties panel you can now directly request the unfolding of a folded parted. This command works on strips as well as on profiles with 2 different cross-sections.
To use this function, you will need the BricsCAD Sheet Metal module.

In the properties panel you can now directly generate a Step file from a profile, plate or volume.
Step files can often be read by CNC machines that process pipes.
To use this function, you will need the BricsCAD Communicator module. All the features of the free viewer

To use the free viewer, all you need to do is install Parabuild. Without an active license, Parabuild will function as a viewer.

Would you like to try out these new features?

Any cookies that are not necessary for the website to function and are used specifically to collect user personal data via analytics, ads, other embedded contents are termed as non-necessary cookies.